Social media websites have largely influenced how people communicate and socialize on the Internet. In my previous post, we focused on cloud computing. As businesses put emphasis on both cloud computing and social media to grow their brands, let’s look at the social networks that dominated the first three quarters of 2016.

The following are the top 11 social networks worldwide as of September 2016, according to online statistics portal Statista. The networks were ranked based on the number of active users.

Number of active users in millions 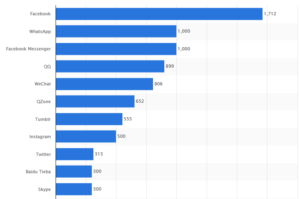 These social platforms have become an integral aspect of digital marketing in their ability to offer organizations important data about their customers’ preferences and feedback. They are expected to make bigger presence in 2017, as demonstrated by their continued efforts to grow their customer base.